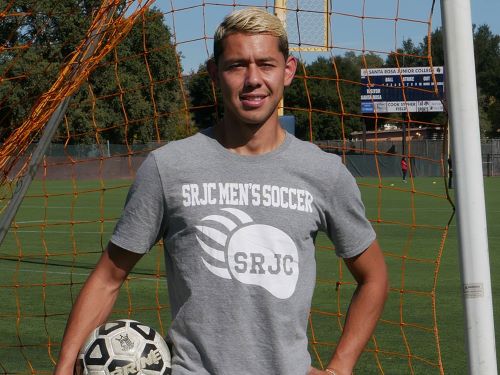 Chris Ochoa started playing soccer when he was a freshman at Petaluma High School. He played two years on the junior varsity team and two years on varsity. After graduating high school in 2009, Ochoa decided to attend Santa Rosa Junior College. He attended for one semester and then decided he wasn’t ready yet for school. He got a temporary job and saved his money so he could travel to Mexico to visit his family.

After visiting for several months, Ochoa was ready to come back to the U.S. He moved back in with his parents, found another job and helped his family out financially. While being back home, Ochoa went through some hard times. He became depressed and slowly had to pick himself up. As he said, “I wasn’t feeling good about certain things that were happening in my life and I didn’t know how to deal with it. I knew the only thing that would help me out is playing soccer.”

Ochoa decided to make an appointment with an SRJC counselor and soccer coach to see if he was still eligible to play soccer for the Bear Cubs. He was now 24 years old and six years had gone by since he last attended SRJC. They both said he was eligible. SRJC men's soccer coach Marty Kinahan and SRJC Dean of Athletics Matt Markovich encouraged him to enroll in school, as well as to begin training with the SRJC soccer team. This was a turning point for Ochoa. His life started taking on a new shape and he was able to work through his depression. “Playing soccer is the one place I can relax and enjoy being with my teammates. I really enjoy this campus,” said Ochoa.

Last semester, Chris Ochoa received an offer to play professionally in Chile. It was a big decision that he had to make. “I was happy but thought I better ask my coach first and see what he thought. My coach said he would support me if that’s what I chose to do but that I should think about the pros and the cons. I could have success there but what do I have to fall back on?” This made Ochoa weigh out his choices and decide that he would continue playing soccer for the Bear Cubs.

“I have to thank my coaches for making me see things differently,” said Ochoa. “They would tell me to use soccer as a vehicle to get me through college.”

Ochoa is now inspired to complete his education at SRJC with an associate degree in Social and Behavioral Sciences, followed by transfer to a CSU, as he keeps improving at playing soccer. His ultimate goal is a sales and marketing career.