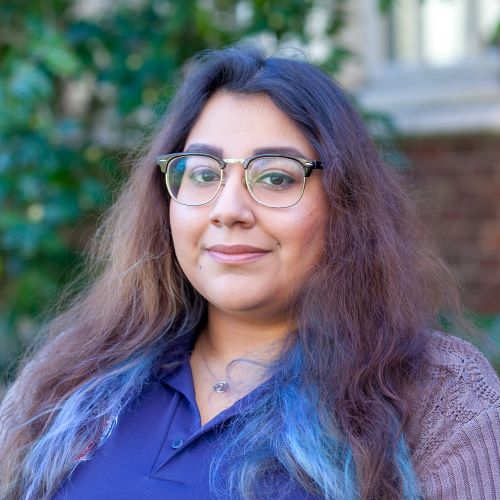 Student Government President Evelyn Navarro’s career plan began with getting a good education. Though there were several unfortunate instances when her plan was derailed, she persevered and is currently pursuing her dreams at Santa Rosa Junior College.

The daughter of immigrants who met in the U.S., Evelyn was born in Santa Rosa. Her dad is from Mexico and her mom is from Ecuador and Mexico. Her mom’s dream was for Evelyn to become a lawyer; she made Evelyn read a lot from an early age so she could be ahead of her peers. Participating in the Advancement Via Individual Determination (AVID) college readiness program at Elsie Allen High School, Evelyn was on the right path to success when an abusive incident halted her progress and she had to drop out of high school.

But she did not give up. Three weeks after dropping out, Evelyn took the GED exam and passed it. Then in the summer of 2012, she started her first college class at SRJC. As she said about her commitment to rise above the situation, “Most of my life I’ve tried to push away from becoming that ‘brown statistic.’ ”

Life seemed to start getting back on a track. Two semesters into her classes at SRJC, Evelyn was exploring classes and topics she wanted to learn and she was an important part of Movimiento Estudiantil Chicanx de Aztlán (MEChA) club. She enjoyed learning about her parents’ cultures and traditions and being part of the student life at the JC.

Yet, when all seemed to go well, she had another major setback: her dad got deported to Mexico, leaving her shocked, without a security network, and nearly homeless. Estranged from her mom, Evelyn was soon evicted from her dad’s apartment in Santa Rosa, since she couldn’t afford rent. She failed her classes, dropped out of college with a 0.8 GPA, and made the best plan she could think of: move to Oklahoma where she could stay with a friend.

But soon she discovered that she had no connection with the mid-West culture, so in 2016 she hopped on a bus with two duffle bags and traveled back Santa Rosa. It took her a few weeks to find her way. Being homeless and crashing at friends’ places or trying to sleep in cars were additional scary experiences. But, luckily, she found housing, work, and in a little while, she returned to SRJC. The first semester back she took 19 units, determined to work the hardest she could to repair her GPA.

Other students noticed her commitment: a classmate approached her about being involved in student government. She ran for president and won on a very diverse slate, with fellow student officers who saw her potential and pushed her to step outside of her comfort zone to become a good leader.

Some of the accomplishments of the SRJC Student Government Assembly, under Evelyn Navarro’s leadership, include extending the food pantry, in collaboration with Student Equity Office and several clubs. Along with the Student Affairs office, SGA officers were involved in many aspects of the SRJC Fire Relief activities and helped everywhere was a need.

The future is still an equation to solve for Evelyn Navarro. As she says, after getting her undergraduate and graduate degrees, “I see myself doing community organizing, being involved with children of immigrant families, and being an advisor. Lastly, I do see myself ending up on the city council or as a city supervisor. I’m not sure where yet, but I have this hope that I would come back to Santa Rosa.”