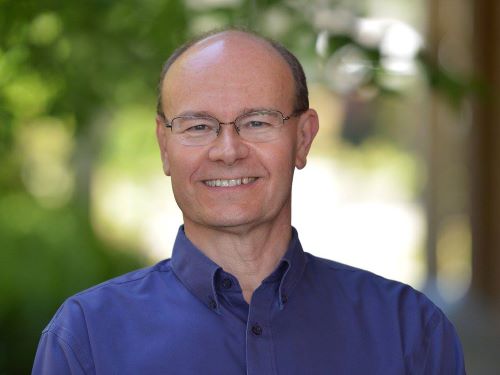 Public speaking is an important part of Hal Sanford’s life and has provided him a teaching career he loves. At this year’s SRJC Day under the Oaks, he was awarded the Alumni & Friends Association Outstanding Faculty Award for his exceptional coaching of SRJC’s Forensics team and for helping even the shyest students to overcome crippling fears and master useful communication skills.

In high school, this faculty member of our Communication Studies Program and SRJC’s Director of Forensics was a debate team member in Glenview, Illinois and later at Northwestern University in nearby Evanston. His Bachelor of Science in Speech was essential for Hal’s future career as a lawyer. Following in his dad’s steps, Hal achieved a doctorate in law at University of Southern California and became a law clerk for Los Angeles Superior Court, then a civil litigation attorney.

Although he loved law, it did not provide him the most rewarding work experience, so Hal used one of his hobbies to get a job as a special effects modeler for WonderWorks in Los Angeles. He worked on models for James Cameron’s movie The Abyss, Michael Jackson’s Smooth Criminal music video, among various projects. He also authored, photographed, published, marketed and sold his plastic modeling how-to guide, “The Illustrated Modelaholic – A Guide to Modeling Enjoyment” in 37 countries.

When his daughter was born, in early the 1990s, Hal and his wife decided they wanted a safer place to raise a child, and relocated to Sonoma County, where his wife had worked in the wine industry. After brief work as a local attorney, he thought education might be a better job for him and began teaching speech and debate at Sonoma State University. In 1994 joined the SRJC Communication Studies Department. Since 2007, he has been coaching the Forensics team and leading it since 2012.

In his teaching, Hal applies what he had learned from his first high school debate coach, “the finest educator I’ve ever known,” he says. His teacher offered support, compassion, and caring at a time when Hal’s parents were going through tough times and young Hal needed guidance. Nowadays, besides knowledge, Hal can be a comforting shoulder in tense situations, a treasured advisor and friend, and a constant supporter for those who need more than just textbook lessons.

Testimony to the trust and bond he has built with his students includes the high performances obtained by the SRJC Forensics team for the 2015-2016 season:  #1 ranked parliamentary debate in the nation among 2-year colleges, as well as the top individual speaker at both the California Community Forensics Association state championships and the Phi Rho Pi 2-year college national championships.

Hal’s SRJC students rave about him using superlative descriptions. They talk about the way he looks at the world with childlike curiosity, or about the fact that he relates to them deeply, guiding them to surpass the fear of judgment while speaking in public. “I think they trust me because I’m very empathic,” says Hal. “If you’re with somebody who is displaying empathy, you sense you’re being heard… then you’re willing to reveal and not defend. If you can be open and receptive to the advice that comes from that caring person, you end up bettering yourself.”

Please contact Hal Sanford to explore the benefits of joining the SRJC Speech and Debate Team.