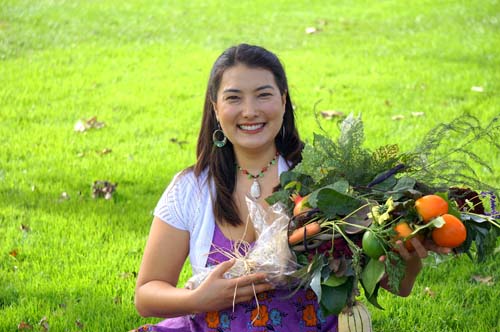 When she enrolled to take classes at SRJC, Kiki LeSeed was still searching for her life’s mission. Now she’s on her way to becoming a food and wellness educator and entrepreneur.

She was born in Silicon Valley suburbia and raised in a traditional Japanese way. But Kiki didn’t know that her American dad and Japanese mom sheltered her from the prejudices they experienced as a young couple. While trying to learn about her mom’s culture, she was bullied by Asian kids for being half-white at her Japanese weekend school. So eventually, she stopped trying to fit in.

Later on, with a degree in Anthropology from San Jose State University, and extensive English as a Second Language (ESL) teaching experience, Kiki signed up for the Japan Exchange and Teaching Program. She was determined to connect with her Asian roots and took a job in rural Naraha, in Fukushima Prefecture, where she taught for three years. There she experienced the cultural shock of being embraced by a close-knit community, with open, inviting and curious locals, who wanted to interact with “the foreigner.” Because she is half Caucasian, she was perceived as an outsider by the villagers, who used the foreign script to write her name, instead of the traditional Kanji letters. After three years in Japan, Kiki concluded the identity battle: “I learned that I am not Japanese and I don’t want to be Japanese. And I am not just American and I don’t want to be just American. I am Japanese-American and those two things together are inherently its own culture.”

Back in the U.S., Kiki experienced a reverse cultural shock, with a hard impact on her mental health: she landed in a country torn down by the recession and deep unemployment and had to live with mom and dad while looking for work. Then the Japanese tsunami happened. The town where she lived was severely hit, and the people she taught and made friends with became refugees in their own country. All those structural changes triggered panic attacks, survivor guilt, and other challenges. Kiki sought help to get better and stronger and, among the ways to heal, she decided to take a vocational training path at SRJC, where a new world opened to her.

Kiki is now building her future by taking classes toward several culinary certificates while showcasing her creations in our Bakery and Culinary Café. Filled with excitement and hope, she appreciates the opportunities offered at the JC: “The instructors in the Culinary Arts program all come from various backgrounds and food beliefs. There are vocational track classes, specialty and ethnic classes, and community education classes. There is something offered for every level of experience and interest. The Career Center allows me to concurrently get professional training in the field while learning about culinary arts.”

The journey to mental wellness made Kiki become an advocate and speaker on the matter. The Culinary Arts classes she takes at SRJC, the support she received here and the warm people and culture in Sonoma County inspired her to dream and plan new adventures, with the ultimate goal of being a food and wellness educator and having her own business.