Administrative Assistant to the Petaluma Dean of Student Services 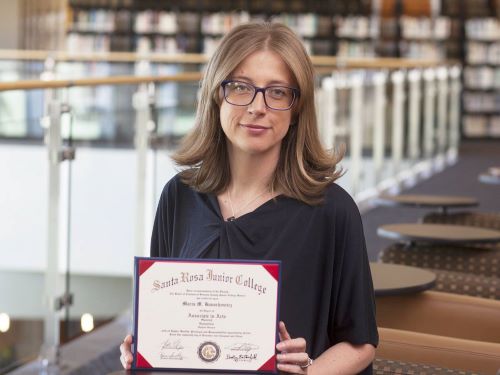 Ten years ago, Maria Banachowicz left her native Poland and immigrated to the U.S. Almost from the day she arrived here, her life has revolved around Santa Rosa Junior College.

Since she spoke almost no English, Maria started looking for ESL classes and discovered SRJC Petaluma, just a few blocks away from her house. At that time the Petaluma Campus had an ESL program with two full-time instructors. They soon became her advisors and friends. She immersed herself completely in learning English and made such progress that soon her instructors, Marianne Arden and Peggy Floren, recommended her for a job as a student employee in the Petaluma administration office.

Just a year after she moved to the U.S., Maria interviewed for an office helper job with the Vice President of the Petaluma Campus, Jane Saldaña-Talley. Maria got the job and one of the best learning experiences she could have asked for: “I was learning English, I was discovering the office environment, I was getting familiar with the district procedures, and I was meeting wonderful new people.”

Along with English classes, Maria thought it would be good to learn some Spanish. Nearly all of her classmates spoke Spanish among themselves and she wanted to join in. A very intensive summer Spanish 1 seemed a very good idea and she continued by taking all four levels offered with one of the most demanding instructors, Mai Nazif.

Work also offered more opportunities and Maria got a second part-time job as an administrative assistant for the Tutorial Center on the Petaluma Campus. By September 2011, she was working for College Skills and the Tutorial Department on both Santa Rosa and Petaluma campuses. She took more classes and made new friends on the Santa Rosa Campus, and in Fall 2011, she earned an Associate Teacher Certificate in Child Development.

Early in 2015, a full-time position opened up in the Petaluma administration office — where her journey had begun. She soon became a full-time employee as Administrative Assistant to the Petaluma Dean of Student Services, Matthew Long.

Among all SRJC experiences, the graduation is the one that brings everything full circle. After studying here for seven years, Maria realized that she was just a few short classes away from a degree. At the end of the fall 2015 semester, she obtained two Associate Degrees with the highest honors, one in Spanish and one in Humanities. She walked in the 2016 graduation ceremony, surrounded by family, coworkers and her SRJC friends.

As Maria said, “I have reached my success — I have received my first degrees in the United States and I am working in a wonderful, intellectually stimulating place. To work where I can learn and to learn where I can work — could I ask for a better place to be? America is still ‘the land of opportunities’ — just ask all those who dream of coming to America. My opportunity was the Santa Rosa Junior College — I took this opportunity to learn English, earn a certificate, earn a degree, and get a great job. I turned this opportunity into my success story.”