When actor Ryan Reynolds proposes marriage to you, most people would happily accept. 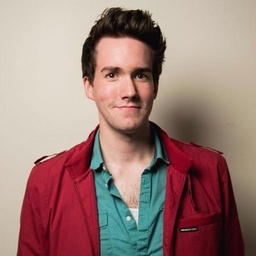 For Max Scoville, it was just another day at the office. The SRJC alumnus interviewed Ryan Reynolds recently about the Deadpool 2 movie for entertainment site IGN. Max shared with the actor his longtime love for the Deadpool character and a book report that he had written in fifth grade. Ryan was so impressed with Max’s dedication to the character that he offered to marry him.

(Watch Max’s interaction with Ryan Reynolds in this piece from the Time magazine.)

After graduating from Sonoma Valley High School, Max attended Santa Rosa Junior College thanks to the support of the Doyle scholarship and other financial aid. But he found his way into journalism, media and the entertainment industry in large part due to his experience working on SRJC’s award-winning student newspaper, the Oak Leaf.

“The Oak Leaf was a huge opportunity for me. A fellow Sonoma Valley High School graduate, Will Cooley, was the editor and chief and he reached out and asked if I wanted to write columns or draw comic strips. I found Anne Belden, the advisor for the paper, to be incredibly welcoming.”

Max was grateful for the opportunity to learn how to write for an audience through the Oak Leaf. “I’m a big proponent for community college. It gives you the chance to figure out what you want to do without racking up massive student debt. You get shot out of a cannon at 18 years old and are expected to know what you want to do for the rest of your life. I was able to try different things without an obligation at SRJC.”

His classes at SRJC gravitated towards art, with various courses in printmaking, painting, life drawing and fashion. After completing his general requirements, Max transferred to San Francisco Art Institute but didn’t finish the program. “I found an internship with CurrentTV and helped get a show off the ground about gaming. It gave me a foot in the door in the industry and I felt I would learn more with a hands-on experience. Persistence and being in the right place at the right time is how you break into the entertainment and gaming industry.”

One of Max’s greatest assets is his ability to wear different hats. He credits the opportunity to take classes in a variety of subjects at SRJC to giving him a multidisciplinary approach to his work.

He used his video production skills and writing skills for Destructoid (a blog), which led to a position with Revision3 (a web television channel) and then was approached by IGN in 2015. They were seeking someone with writing, hosting and producing skills who was passionate about pop culture.

Max currently co-hosts and produces Up At Noon, a weekly pop culture variety show, and Podcast Beyond, a weekly gaming talk show focused on PlayStation. He also records and hosts a few personal podcasts, The Comedy Button and Weird Heat.

“Getting a job in any media field in 2018 is a moving target because things are constantly changing. The nuts and bolts of journalism are incredibly important, and communicating via writing is a skill I honed at the Oak Leaf. It’s funny how popular podcasts have gotten, we’ve reached this point on the internet where we have 24-hour streaming high definition videos, yet people have gravitated back towards a type of radio.”

Whether he’s interviewing Ryan Reynolds, Jackie Chan, Harrison Ford, or musing on his podcasts about raccoons, Max is thriving in the constantly evolving entertainment and gaming industry.