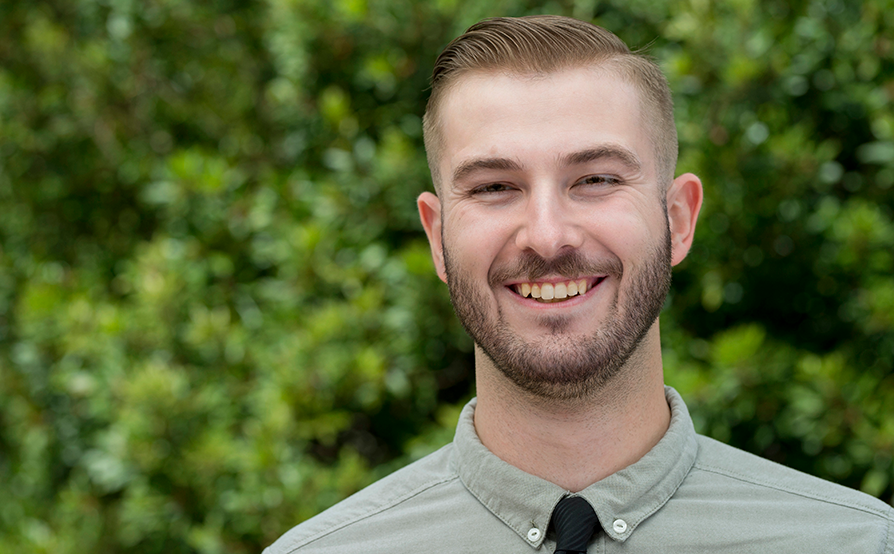 Throughout high school, Nicolas ‘Nick’ Rilea never thought college was in his future. Nor could he imagine that he would achieve five associate degrees in three years and be selected as the graduation speaker at Santa Rosa Junior College’s 100th Commencement ceremony. At the JC, he found success, a second family, and an unexpected home.

Nick began his story in Cloverdale, where he lived most of his life and attended school. Most of his friends at Cloverdale High School planned to go to four-year universities or enlist in the military, while Nick wanted to continue his education, but could not afford expensive tuition. He credits the SRJC Doyle Scholarship as one of the primary reasons he enrolled in college, along with encouragement from his high school counselor and his mom, who is an adjunct instructor at SRJC.

As he said, “I grew up with very little money in my family. I knew I couldn't afford to go to college and I honestly didn't even think I would be in college right now. Originally I had no intention of even enrolling.”

Nick was pretty overwhelmed by college life in the beginning. He went from a very small school where he knew everyone to a bustling college campus, with thousands of students, where he knew almost no one. But he soon found that he enjoyed making friends, getting to know the faculty, and exploring a rich academic and student life.

He began to understand that community college offered opportunities that he hadn’t even imagined were possible. “Here, I was exposed to people from every walk of life,” said Nick. He took challenging classes that he thoroughly enjoyed. He changed his major from political science to economics, and then to communication studies, later changing it back to political science. He thought he would be done with his degree in two years, but at the end of his third year, he was awarded five degrees! These were in political science, history, communication studies, humanities, and social and behavioral science.

Among the faculty who enriched Nick Rilea’s experience at SRJC, a few personal heroes stood out. He said that Forensics Instructor Hal Sanford is, “a personal hero who has really helped me out in more ways than I can ever tell.” Hal guided Nick through four semesters of speech and debate competitions, where he won both state and national titles and medals.

Instructors Susan Houlihan and Mark Nelson mentored him in communication studies. Other faculty instrumental in Nick’s college experience were Political Science Instructor Claudia Moura, History Instructor Erik Bruce, and Administration of Justice Instructor Joe Anderson.
SRJC did change Nick’s life in the best way possible and Nick put a lot of heart and hard work into this experience. As he said in his graduation speech, “Attending SRJC was the only chance to go to college without falling into crippling debt. It was one of the best decisions of my young adult life.”

After graduating at the end of the spring 2019 semester, Nick plans to transfer to Grand Canyon University in Arizona to pursue a bachelor’s degree. Afterward, he will attend law school. Nick’s ultimate goals are to serve in the military as a Judge Advocate and also hopes to practice constitutional law later in his life. He would love to work defending civil liberties of people who are underserved.