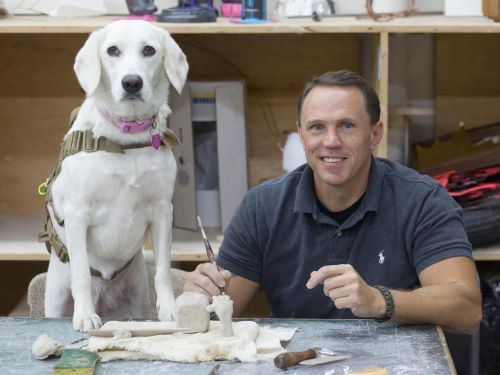 Todd Bamford is a wounded retired US Army veteran, awarded with two Purple Hearts and a bronze star medal with valor. He had spent nearly 19 years as an Army soldier, completed three tours in Iraq and was on his fourth Afghanistan tour when he was injured in an explosion in October 2010.

“My life changed dramatically that day in Afghanistan and I began a new process of finding the new me and what I want to become in life,” said Todd. He spent three years in a hospital, recovering from extensive injuries which still require therapy to this day. As a consequence of the explosion, he also suffers from post-traumatic shock syndrome (PTSD) and from seizures. Medication helps to keep his ailments at bay. Tender love and care from Molly, his sweet service dog, also contributes tremendously to his well-being.

Todd found Molly at the Sonoma Humane Society when she was a puppy. He fell in love with the smart Golden Retriever and Lab mix, so he adopted her, then trained her as a service dog. Having aced her exams at the Bergin University of Canine Studies, Molly is now certified to recognize PTSD, and is working on her certification to help with seizures. She reacts to Todd’s body language and helps take his focus off stressful situations. The two-year-old pup goes everywhere Todd goes. She is so popular that people who might not even know Todd’s name are quick to ask “Where is Molly?” when he is walking around the SRJC campus without her.

For Todd, attending SRJC was one of the steps in rebuilding his life. Years ago, after his initial Army term, he was a student here and graduated from our Firefighter Academy. He worked for Cal Fire in Sea Ranch, Occidental, and Santa Rosa for several years, before returning to the Army. Throughout his military career in foreign countries, he loved exploring art museums and learning about other cultures. After his injury and retirement from the Army, he decided to pursue a career related to teaching art or history and returned to take classes at SRJC.

Todd’s transition from military to civilian life involved a lot of time and pieces coming together. With the support of Military Warriors Support Foundation, he enrolled in a three-year program, after which he will own a house and have stability. The Wounded Warrior Project connected him with fellow veterans at events across the country and helped him gain more courage to step out and be more open. Segs4Vets, which provides Segways to veterans who’ve been severely injured in Iraq and Afghanistan, also helped to increase his mobility when the hip injuries prevent him from coming to school or walking around. And, as Todd says, “The Veterans Center at SRJC and the Disability Resources Department here have been instrumental in my ability to adapt back into a normal life and become the man I can be.” As a former squad leader and platoon leader, he is always looking for opportunities to help other veterans, even if this involves sharing his story, getting in the spotlight and leading by example. “Most of my life I was taking care of people, so I try to keep that going,” says Todd Bamford.

Santa Rosa Junior College is an approved college for the training of veterans and their dependents, under the various US and California public laws. Visit our Office of Veteran Affairs to learn about the resources available.

Students with disabilities are entitled to academic accommodations for limitations from the disability in the educational setting. Visit our Disability Resources Department to explore the services we offer.